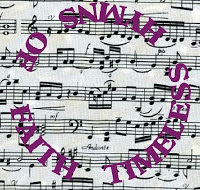 TIMELESS HYMN  - Another revised and repeated blog of one of my favorite Gospel songs - Yes I Know - originally shared on May 9, 2010.

Recently I heard of a Christian family whose daughter had obviously sinned. The results of her sin were public because this single young lady could not hide her resulting appearance. As is too often the case in such situations, her parents received all sorts of unwanted advice from their "spiritual" friends. The advice included suggestions that they should disown their daughter to even suggesting that her father should resign his position in church. I am guessing that some even thought she should be made to confess her sin in front of the congregation. It is amazing how cold and harsh fellow Christians can be. These same Christians can gossip about the situation, but they don't see that as a sin - at least not a sin of the same seriousness. So often we can see the sins of others but not our own. And we can go on gossiping and thinking that some sins are worse than others – at least worse than ours. But sin is sin. And the scriptures remind us that all have sinned. Without Christ we are lost  and as some hymn writers have written, we are vile wretched people, without hope. But we know that Christ can make the vilest sinner clean – even the murderer, the drug pusher, and the gossip. Guy Penrod, formerly with the Gaither Vocal Band, wrote a gospel song that speaks to this fact. Hopefully you can relate to the words of this week's choice as you read the words below and listen to the Gaither Vocal Band on the link below.

Listen to it here  I KNOW

Posted by Barry Kauffman at 1:00 AM