NOW THANK WE ALL OUR GOD

I thought that I'd conclude the traditional "Thanksgiving season" with another hymn of praise. Now Thanksgiving should be 24/7 for all Christians and this hymn would be appropriate to sing throughout the year. Unfortunately, it is seldom sung or heard anymore. But what a challenge for us to live with thankful hearts and voices for the countless gifts of love our Father has given to us. This week I have been able to find some of the history concerning the writing. Martin Rinkart, a Lutheran minister, was in Eilenburg, Saxony, during the Thirty Years' War. The walled city of Eilenburg saw a steady stream of refugees pour through its gates. The Swedish army surrounded the city, and famine and plague were rampant. Eight hundred homes were destroyed, and the people began to perish. There was a tremendous strain on the pastors who had to conduct dozens of funerals daily. Finally, the pastors, too, succumbed, and Rinkart was the only one left — doing 50 funerals a day. When the Swedes demanded a huge ransom, Rinkart left the safety of the walls to plead for mercy. The Swedish commander, impressed by his faith and courage, lowered his demands. Soon afterward, the Thirty Years' War ended, and Rinkart wrote this hymn for a grand celebration service. It is a testament to his faith that, after such misery, he was able to write a hymn of abiding trust and gratitude toward God. Certainly God has blessed you and maybe He's also brought you through some very difficult personal "wars". Raise your voice in praise as you sing these words and thank Him for the countless gifts of love you have experienced from His hands.
(1) Now thank we all our God, with heart and hands and voices,
Who wondrous things has done, in Whom this world rejoices;
Who from our mothers' arms has blessed us on our way
With countless gifts of love, and still is ours today.
(2) O may this bounteous God through all our life be near us,
With ever joyful hearts and blessed peace to cheer us;
And keep us in His grace, and guide us when perplexed;
And free us from all ills, in this world and the next!
(3) All praise and thanks to God the Father now be given;
The Son and Him Who reigns with Them in highest Heaven;
The one eternal God, whom earth and Heaven adore;
For thus it was, is now, and shall be evermore.
I am providing two sources this week for you. The first is an upbeat version which I really enjoy.
LISTEN 1
The second is a more traditional, classical version of this great hymn.
LISTEN 2
Posted by Barry Kauffman at 1:00 AM No comments: 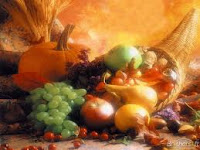 There are a number of hymns that have traditionally been sung at Thanksgiving and one of my favorites is "Come Ye Thankful People, Come", written by Henry "Dean" Alford in 1844. It was written for the English harvest festivals, a movable feast which varies according to the harvest time in different villages that celebrate it. The hymn writer is regarded as a gifted, Christian leader of the 19th century, a distinguished theologian and scholar, as well as a writer, poet, artist and musician. The composer is George J. Elvey, an longtime organist at the Windsor, Royal Castle. Originally, this hymn was meant to be a harvest song, and was titled "After Harvest" with seven stanzas. Only four remained in common use. It was originally accompanied by the text "He that goeth forth and weepeth, bearing precious seed, shall doubtless come again with rejoicing, bringing his sheaves with him" (Psalm 126:6). The first stanza of this thanksgiving hymn is an invitation and a exhortation to give thanks to God in the earthly temple – His Church – for the heavenly care and provision of our earthly needs. The following two stanzas are an interesting commentary on the Parable of the Wheat and the Tares as recorded in Matthew 13:24-30, 36-43. The final stanza is a prayer for the Lord's return –"the final harvest home" – the culminating event that Henry Alford saw as the ultimate demonstration of God's goodness in His eternal purpose of man's Redemption. It is said that at the end of a hard day's work, as well as after every meal, it was customary practice for "Dean" Alford to stand to his feet and give thanks to God for the blessings enjoyed during the day. This spirit of perpetual gratitude is clearly evidenced throughout this hymn. Because of Alford's strenuous efforts and unlimited activities in the Christian ministry, he suffered a physical breakdown in 1870, and died on January 12, 1871. During his lifetime one of his cherished dreams was to visit the Holy Land. Although this dream was never realized, it was said of him that his eyes were fixed upon the Heavenly Jerusalem toward which he journeyed. On his tombstone the following appropriate inscription is found: "The Inn of a Pilgrim Traveling to Jerusalem." So let me continue Alford's call for all thankful people to come and raise a song of praise to our great God who showers us with His blessings and provides us with more than we need. May you have a blessed Thanksgiving as you raise your voice in thanks to Him who alone is worthy of all of our praise.
(1) Come, ye thankful people, come, raise the song of harvest home;
All is safely gathered in, ere the winter storms begin.
God our Maker doth provide for our wants to be supplied;
Come to God's own temple, come, raise the song of harvest home.
(2) All the world is God's own field, fruit unto His praise to yield;
Wheat and tares together sown unto joy or sorrow grown.
First the blade and then the ear, then the full corn shall appear;
Lord of harvest, grant that we wholesome grain and pure may be.
(3) For the Lord our God shall come, and shall take His harvest home;
From His field shall in that day all offenses purge away,
Giving angels charge at last in the fire the tares to cast;
But the fruitful ears to store in His garner evermore.
(4) Even so, Lord, quickly come, bring Thy final harvest home;
Gather Thou Thy people in, free from sorrow, free from sin,
There, forever purified, in Thy garner to abide;
Come, with all Thine angels come, raise the glorious harvest home.
Listen to this week's hymn of thanksgiving here. LISTEN
Posted by Barry Kauffman at 1:00 AM No comments: 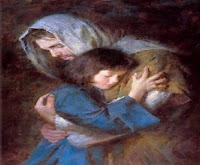 A friend of mine just told me that he has just met the love of his life. And he is so excited. It is special to find a person that you can love with your whole heart and who loves you as well. When you do find such a person, you want to spend all of your time with them. You want to share all of your dreams, your cares and your experiences with them. You want to honor them, and trust them, and give them your all. Unfortunately, human love often fails. But there is one who loved us even when we were unlovable. And He is a true friend who has promised never to leave us or forsake us. Our desire should be to love Him and we should want our love for Him to grow deeper and fuller every day. This was the desire of Elizabeth Payson Prentiss who struggled with insomnia and severe headaches for her entire life. After the loss of two children in short succession, Elizabeth's frail health was nearly broken and she cried out in her distress "Our home is broken up, our lives wrecked, our hopes shattered, our dreams dissolved, I don't think I can stand living for another moment." But it was during this time of tremendous emotional suffering that Elizabeth wrote the lyrics that eventually became the hymn, More Love to Thee, O Christ. The words that Elizabeth wrote joyously proclaim the Christian's desire to love their Savior more everyday. However, Elizabeth originally did not finish her poem. Thirteen years later, she found the unfinished poem. She would have left it unfinished but for her husband's encouragement. Her husband printed several copies, one of which found its way to William Howard Doane, a musician in Cincinnati. He set the words to music and published the hymn in his Songs of Devotion. Elizabeth once said that "To love Christ more, is the deepest need, the constant cry of my soul … Out in the woods and on my bed and out driving, when I am happy and busy, and when I am sad and idle, the whisper keeps going up for more love, more love, more love!" Is that your desire as well? It should be. We love Him because He first loved us.
(1) More love to Thee, O Christ, more love to Thee!
Hear Thou the prayer I make on bended knee.
This is my earnest plea: More love, O Christ, to Thee;
More love to Thee, more love to Thee!
(2) Once earthly joy I craved, sought peace and rest;
Now Thee alone I seek, give what is best.
This all my prayer shall be: More love, O Christ to Thee;
More love to Thee, more love to Thee!
(3) Let sorrow do its work, come grief or pain;
Sweet are Thy messengers, sweet their refrain,
When they can sing with me: More love, O Christ, to Thee;
More love to Thee, more love to Thee!
(4) Then shall my latest breath whisper Thy praise;
This be the parting cry my heart shall raise;
This still its prayer shall be: More love, O Christ to Thee;
More love to Thee, more love to Thee!
Listen to it sung here. LISTEN
Posted by Barry Kauffman at 1:00 AM No comments:

Pinebrook is one of our favorite places to minister in music. We have served there at various times for over 40 years. We especially enjoy leading leading music for the annual Sr. Saints Retreat.