I KNOW WHO HOLDS TOMORROW 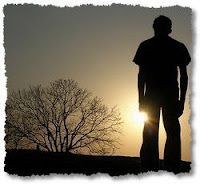 As a singer evangelist Ira Stanphill (1914 - 2003) traveled the United States and Canada extensively and around the world to 40 countries to preach and perform his music. He is said to have composed more than 500 gospel songs.  Many famous secular singers have performed his works, such as Elvis Presley ("Mansion Over the Hilltop") and Johnny Cash ("Suppertime").    In 1939, Stanphill married Zelma Lawson, a minister's daughter who "played piano by ear and accompanied her parents on a local radio program."  But unfortunately that marriage ended in divorce in 1948. It is said that he wrote "I Know Who Holds Tomorrow" during the dissolution of his marriage. According to acquaintances, Stanphill's wife grew tired of his ministry and left him to pursue a career of her own in entertainment. Sadly, she was killed in a car crash sometime later. The lyrics of this song aptly convey the emotions of listlessness and doubt that Stanphill encountered while going through such a difficult period in life.  During the years of separation, divorce and her death, Stanphill is said to have sunk into a deep depression. Ace Collins writes in "Turn Your Radio On" that Stanphill was driving one night when he began to hum and then sing a song. He was singing about not knowing what the future held but trusting God with the future. Upon arriving home, he rushed to his office and his piano and jotted down the words.  Over the years these words have been claimed by so many who are facing an unknown future.  But as a child of God we can face the future with the full knowledge that there is one who does hold tomorrow and does tenderly and safely lead us through whatever is ahead.  What peace, direction and security we can obtain as we walk with Him, the one who really knows our tomorrow.  Are you worried about tomorrow?  I think that often we all are.  But what a comfort it is to realize that the one who really loves us will walk through it with us and He knows the way.

2.     Every step is getting brighter
As the golden stairs I climb;
Every burden's getting lighter,
Every cloud is silver-lined.
There the sun is always shining,
There no tear will dim the eye;
At the ending of the rainbow
Where the mountains touch the sky.
Many things about tomorrow
I don't seem to understand
But I know who holds tomorrow
And I know who holds my hand.

listen to it here.  TOMORROW
Posted by Barry Kauffman at 1:00 AM