THE POWER OF THE CROSS 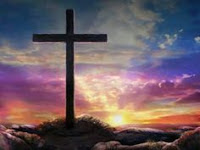 During this Easter season you have probably heard and maybe even sung numerous hymns about the cross and the blood that Jesus shed there for our salvation.  Over the centuries this has been a common theme for numerous hymn writers.  But now there are some newer, powerful hymns also proclaiming the same themes.  One of my favorites is this week's choice which was written by Stuart Townend and Keith Getty.  Keith Getty and his wife Kristen and veteran British English songwriter and worship leader Townend, have been reinventing the traditional hymn form.   It has been estimated that their hymns are sung by 100 million people in churches around the world each year.  Keith Getty has said,  "I do not pretend to be qualified to write a theological treatise on this particular subject. Congregational singing is a holy act, and as I organize my thoughts, I hear my old pastor, Alistair Begg, reminding me that in our song worship, we have to be spiritually alive ..."  1 Corinthians 1:18 (AMP) says, "For the story and message of the cross is sheer absurdity and folly to those who are perishing and on their way to perdition, but to us who are being saved it is the manifestation of the power of God."  About this hymn, Keith Getty has said, "The Power of the Cross is a meditation on the sufferings of Christ. Over the past couple of years, we have been working through the Apostles Creed and writing hymns teaching the fundamental beliefs of Christianity. The Creed teaches that "He suffered under Pontius Pilate," and in communion we are commanded to "remember his death 'til he comes." In the New Testament, Paul and the Apostles often preached and prayed in more detailed and visual ways about the cross, turning all of our senses to Christ's sufferings and their significance. Stuart and I considered how the reality of His sufferings should penetrate our worship services and were challenged by the need to explain the overwhelming significance and implications these have for our lives. In our congregational worship the sufferings of Christ have often only been given a surface glance, and it is hardly surprising that the theological meaning often remains confused.
This the power of the cross; Christ became sin for us.
Took the blame, bore the wrath, We stand forgiven at the cross.
Our hope is that the hymn, The Power of the Cross, will be a resource to the church as a declaration of what we believe is a challenging reflection on Christ's sufferings and a powerful song for Easter or Communion services. It is also our hope that people will be challenged again by the wonder and the power of the Cross."   May we daily reflect upon the power of the cross and the glorious exhibition of God's love.   In the cross we see the way to victory.  He is risen!

Oh, to see the dawn
Of the darkest day:
Christ on the road to Calvary.
Tried by sinful men,
Torn and beaten, then
Nailed to a cross of wood.

CHORUS:
This, the pow'r of the cross:
Christ became sin for us;
Took the blame, bore the wrath—
We stand forgiven at the cross.

Now the daylight flees;
Now the ground beneath
Quakes as its Maker bows His head.
Curtain torn in two,
Dead are raised to life;
"Finished!" the vict'ry cry.

Oh, to see my name
Written in the wounds,
For through Your suffering I am free.
Death is crushed to death;
Life is mine to live,
Won through Your selfless love.

FINAL CHORUS:
This, the pow'r of the cross:
Son of God-slain for us.
What a love! What a cost!
We stand forgiven at the cross."

Listen to it here.   POWER