I WONDER AS I WANDER 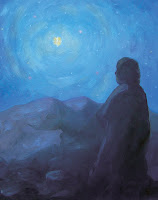 There are many interesting stories about the writing of various Christmas carols, but the story behind this week's choice is a rather unique one.   "I Wonder As I Wander" is a Christmas hymn written by folklorist John Jacob Niles (1892-1980), based on a song fragment he heard while traveling in the southern Appalachians.  In 1933 Niles was walking around Murphy, North Carolina, when he noticed the police trying to evict some folks from the center of town.  Here, in his words, is how he remembered the incident.  "I Wonder As I Wander grew out of three lines of music sung for me by a girl who called herself Annie Morgan. ... The Morgan family, revivalists all, were about to be ejected by the police, after having camped in the town square for some little time, cooking, washing, hanging their wash from the Confederate monument and generally conducting themselves in such a way as to be classed a public nuisance. Preacher Morgan and his wife pled poverty. They had to hold one more meeting in order to buy enough gas to get out of town. It was then that Annie Morgan came out - a tousled, unwashed blond, and very lovely. She sang the first three lines of the verse of "I Wonder As I Wander".  At twenty-five cents a performance, I tried to get her to sing all the song. After eight tries, all of which are carefully recorded in my notes, I had only three lines of verse, a garbled fragment of melodic material, and a magnificent idea. With the writing of additional verses and the development of the original melodic material, "I Wonder As I Wander" came into being. I sang it for five years in my concerts before it caught on. Since then, it has been sung by soloists and choral groups wherever the English language is spoken and sung."  Niles's "folk composition" process caused confusion among singers and listeners, many of whom believed this song to be anonymous in origin. Niles undertook lawsuits to establish its authorship and demanded royalties of other performers of the song.  The words of this folk song are rather simple as they share the events of the first Christmas.  But it does raise an interesting question that we might also ponder.  Why would Jesus leave all the glory and riches of heaven to come to this earth to be born in a cow stall and then later pay the penalty for our sin?  The answer is profound.  It was simply the will and plan of God the Father and Jesus displayed great grace and mercy, being obedient even to His death.  Rejoice this Christmas season in the truth of this great gift given for each of us.

2.     When Mary birthed Jesus 'twas in a cow's stall
With wise men and farmers and shepherds and all
But high from God's heaven, a star's light did fall
And the promise of ages it then did recall.

3.     If Jesus had wanted for any wee thing
A star in the sky or a bird on the wing
Or all of God's Angels in heaven to sing
He surely could have it, 'cause he was the King

Listen to it here.   LISTEN
Posted by Barry Kauffman at 1:00 AM