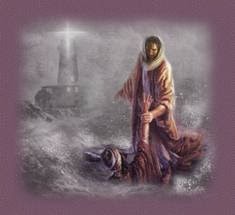 In days when reaching the lost seemed to be more of a priority for most believers, many hymn writers and evangelists would use the sea to illustrate the sin in which the lost were drowning.  They would then refer to things, such as lighthouses and lifelines, as the Gospel which was needed to rescue drowning mankind.  Such was the case with the prolific blind hymn writer , Fanny Crosby, who penned the words to "Rescue The Perishing".  Often we don't know the story behind the writing of a hymn, but in this case we do.  In his Story of Ninety-Four Years, the Rev. S. Trevena Jackson gives the account of how this hymn came to be written, just as he had received it from the lips of Fanny Crosby. "It was written in the year 1869, when I was forty-nine years old. Many of my hymns were written after experiences in New York mission work. This one was thus written. I was addressing a large company of working men one hot summer evening, when the thought kept forcing itself on my mind that some mother's boy must be rescued that night or not at all. So I made a pressing plea that if there was a boy present who had wandered from his mother's home and teaching, he would come to me at the close of the service. A young man of eighteen came forward and said, 'Did you mean me? I promised my mother to meet her in heaven, but as I am now living that will be impossible.' We prayed for him and he finally arose with a new light in his eyes and exclaimed in triumph, 'Now I can meet my mother in heaven, for I have found God!' A few days before, Mr. Doane, the musical composer, had sent me the subject, 'Rescue the Perishing,' and while I sat there that evening, the line came to me, 'Rescue the Perishing, care for the dying.' I could think of nothing else that night. When I arrived home I went to work on the hymn at once, and before I retired it was ready for the melody. The next day my song was written out and forwarded to Mr. Doane, who wrote the beautiful and touching music as it now stands to my hymn.  In November, 1903, I went to Lynn, Massachusetts, to speak before the Young Men's Christian Association. I told them the incident that led me to write 'Rescue the Perishing,' as I have just related it. After the meeting a large number of men shook hands with me, and among them was a man, who seemed to be deeply moved. You may imagine my surprise when he said, 'Miss Crosby, I was the boy, who told you more than thirty-five years ago that I had wandered from my mother's God. The evening that you spoke at the mission I sought and found peace, and I have tried to live a consistent Christian life ever since. If we never meet again on earth, we will meet up yonder.' As he said this, he raised my hand to his lips; and before I had recovered from my surprise he had gone; and remains to this day a nameless friend, who touched a deep chord of sympathy in my heart."  Times have changed, but mankind is still drowning in the sea of sin. The Gospel has not changed and it can still rescue and save mankind, those who are drowning and headed for spiritual death.  It must still be our desire and goal to share the Gospel which alone can rescue them.  May we do our part to rescue the perishing, with a renewed spirit and fervor.

(2)   Though they are slighting Him, still He is waiting,
Waiting the penitent child to receive;
Plead with them earnestly, plead with them gently;
He will forgive if they only believe.
Rescue the perishing, care for the dying,
Jesus is merciful, Jesus will save.

(3)    Down in the human heart, crushed by the tempter,
Feelings lie buried that grace can restore;
Touched by a loving heart, wakened by kindness,
Chords that were broken will vibrate once more.
Rescue the perishing, care for the dying,
Jesus is merciful, Jesus will save.

Listen to it being sung here.  LISTEN
Posted by Barry Kauffman at 1:00 AM

Great motivational hymn I use in my personal outreach ministries in words and by email to friends, many of them lukewarm Christians or unbelievers.
Another great prayer/ hymn is What a Friend we have in Jesus, best as the 4 stanza version. I distribute copies in my contacts with believers and outreaches to unbelievers.
Herman Rutner, retired industrial scientist and dispensational biblicist by avocation